Launched in 1995, and published six times a year, Airport World is the official magazine of The Airports Council International (ACI) World. Its primary aim is to provide a forum for airport-related management issues, a vehicle for airports to promote and market themselves, and a direct route for suppliers of products and services to airports. Interviews with the top management at airports around the world, as well as exclusive analyses of ACI data, make up a major proportion of the magazine’s co 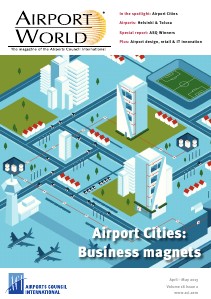